Puppets don’t always have to be big. You can have lots of fun – and cover lots of language too – using finger puppets in the EFL classroom.  The great thing about them is that they’re small and so are easily transportable.  They’re also cheap – we’ve often bought them from craft markets. (There are some great knitted ones – mostly animals – from South America!)  You can also easily make some from paper or cardboard. Finally students can make them too, or take turns with playing with your finger puppets. 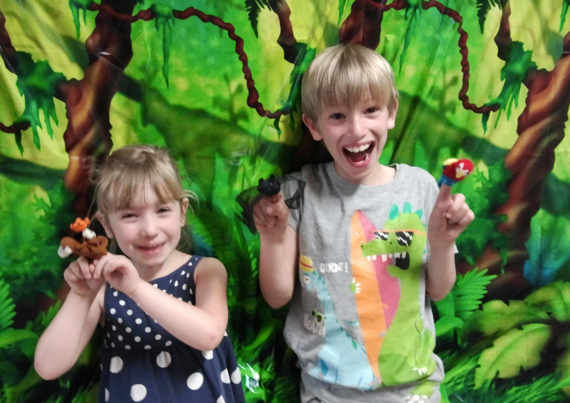 Getting ready for a mini ‘Monkey Puzzle’ show* 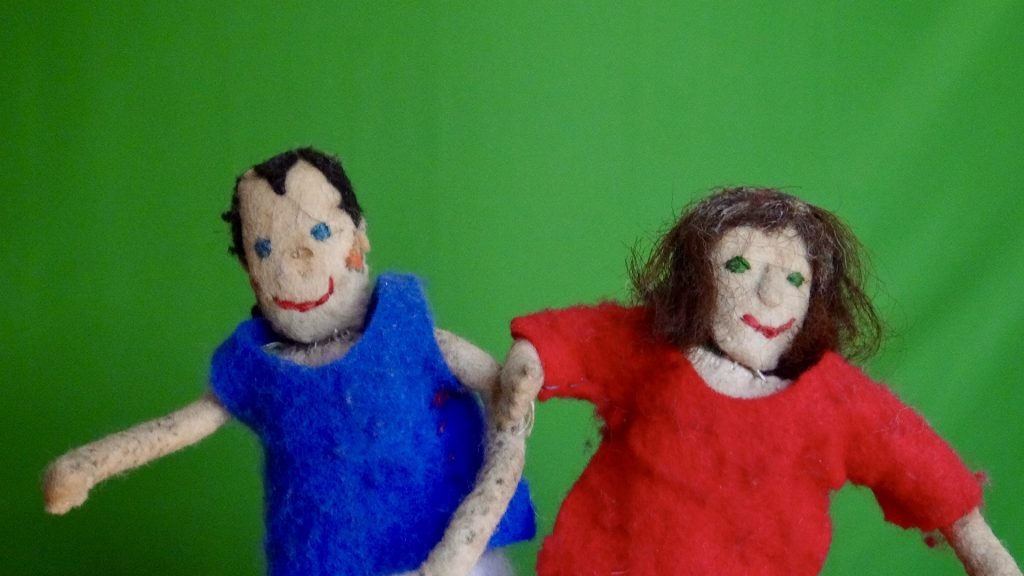 John and Chris chilling in the green room …!

*Doing a finger-puppet version is a great way to get the students familiar with the Monkey Puzzle story before acting it out themselves, by the way.  They can do it in groups, using chairs as mini-theatres.

In my version of the Gingerbread Man, the students each have their own cut-out Gingerbread Man finger puppet.  (They make them beforehand, and colour them in individually.)  As I tell the story, the students act it out with their little man.  At the end of the show they often put all the decorated gingerbread men together to make a poster.

The only problem is that sometimes, in a large class, it’s hard to see small puppets. So think about the seating arrangements if you’re going to use them.

For this you make two dickie bird puppets and put them on your first fingers.  Then you start to tell the story.  Introduce the puppets by telling the class that they are ‘dickie birds’.  To be honest, I don’t know what dickie birds are!  I’d never thought about it until I started writing down the instructions.  Here’s the rhyme:

Two little dickie birds sitting on a wall,
One named Peter, one named Paul.
Fly away, Peter! Fly away, Paul
Come back, Peter! Come back, Paul

If the children don’t already know the song, watch the video: https://www.youtube.com/watch?v=pZw9veQ76fo

This works well with finger puppets. Make a cardboard stage with a pond and a hill, or use chairs covered with cloths; low for the pond, high for the hill.

There are some good templates here: https://www.danyabanya.com/diy-hand-finger-puppets-five-little-ducks/

To make it more than just a song, include other characters for Mummy Duck to meet (eg. horse, cow, dog) and incorporate some simple repetitive dialogue between verses, eg. ‘Where’s my little duck? ‘I don’t know … sorry!’

Students can easily make their own puppets, especially if you give them a simple template.  You’ll find other animal puppets to give you some ideas here: https://mrprintables.com/farm-animal-finger-puppets.html.