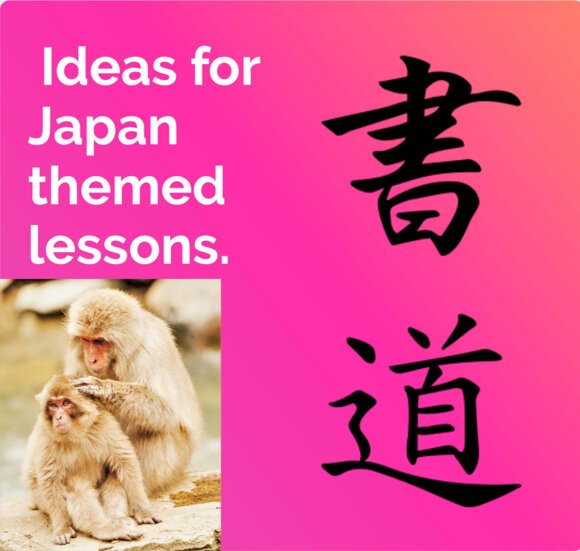 Primary students find Japan a fascinating country.  As Japan has such a rich history – especially in art – there are many different projects that you can do.

So here are some ideas on lesson plans for Japan-themed projects.

Warmer for introducing the topic of Japan

My lesson plans for Japan-themed classes often start like this.  With the older primary-school students I ask how many words of Japanese they know (try this yourself – in fact, you probably know a lot more than you think!).  I start them off with ‘manga’, and then define the words to give them a hint. For example, ’What’s the name of the food made with fish inside rice?’  There’s always at least one person in the class who knows ‘sushi’.  A lot of students will know words from playing computer games.

Other common words are:

Probably the easiest project you could include in lesson plans for Japan-themed classes is origami.  Primary-school students love doing it.  It’s cheap, easy to do and is a type of TPR (Total Physical Response) lesson too.  The students follow your instructions, and when you finish they’ll (hopefully) have something that they can take away with them or put on display.  On our site there are more details of how you can exploit origami in the language-learning classroom. https://www.bat-i-burrillo.com/teachingideas/origami-finger-puppets

Japan has a rich puppet history too – there is a form of Japanese puppetry called Bunraku, which started in Osaka in the 15th century.

The story book ‘I live in Tokyo’ by Mari Takabayashi gives a good insight into today’s Japan and is written in very simple English.  If you’re reading it aloud to the class, remember that you can change the text as you read it.

There are some great videos you could also include in lesson plans for Japan.  If you google: ‘Independent kids in Japan’ you’ll find a selection of videos suitable for primary.  There’s even a TV show where they set very young students tasks, and film how they get on.  This one is in Japanese, but it’s very clear what’s going on and it’s a great conversation-starter with primary students.

The second video is from an Australian documentary that is 8 mins long.  Again, you can show snippets to the students and ask the class to describe what they think is happening in the video.

I also came across this website recently – it’s called LiveWorksheets, and what’s so great about it is that it has interactive worksheets that students can do online and mark themselves – how great is that!!  You can send the students the link, or embed the link in your LMS such as Moodle or Edmodo.  The students do the exercise online, and when they finish they click on the ‘finish’ button.  This gives two options: check their own answers and/or send the mark to the teacher.  Here’s the link for a section perfect for lesson plans for Japanese themes … and, oh yes, it’s free too!