Do you speak TEFL?!

I’ve just realised that in some of these posts I’ve used some terms that you might not be very familiar with.  EFL and CLIL are full of acronyms and abbreviations!  So I’m going to reread my posts, highlight any EFL terms and definitions that I haven’t fully explained, and link them to this glossary page here!

I hope that you find it useful.  As we write more posts, we’ll add to the terms and definitions. 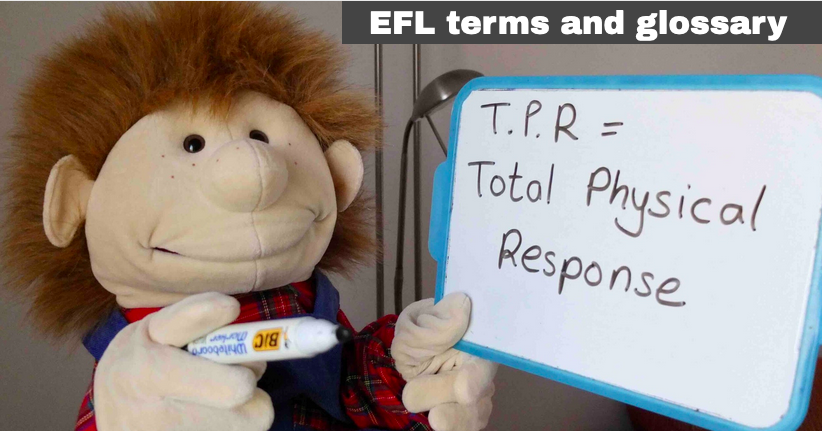 actor: a performer who assumes the role of a character in a performance/play.  An actor can be either male or female.  (It’s outdated to say ‘actress’, and the only time it’s really used now is during the Oscar ceremony, when it’refers to the award rather than the job.)

to ad-lib: to improvise lines that are not part of the written script.

audience: the public, the people who watch the performance.  In the examples I’ve talked about here, it usually refers to the other students!

authentic task: a task which involves learners in using language, or an activity (for example, a role-play of buying a drink) in a way that replicates its use in the real world.

backdrop: usually a flat surface, often the width of the stage or the performance area.  The scenery is usually painted or printed on this.

backstage: the area behind or beyond the stage or the performance area.

cast: the group of people selected to be the characters in a play/performance.

characterization: how somebody uses their body, voice, and movement to develop and portray a character.

CLIL: Content and Language Integrated Learning.  It refers to teaching subjects such as science, history and geography to students through a foreign language.

collective role: the role of a character played by more than one of the students (usually simultaneously).

communicative language learning: this approach is based on the idea that learning a language involves having to communicate real meaning.

co-operative activities: the class working together to create something, for example, a shadow-puppet theatre show.

to craft something: to make or write something with a lot of care.

craft shop: a specialist shop where you can buy articles for making things by hand, for example, glue, paper, glitter, etc.

choreography: the sequence of steps and/or movements in performance.

critical thinking: the objective analysis and evaluation of something in order to form a judgment.

cut: to stop the action, eg ‘Cut!’ shouted the director.

dialogue: the spoken conversation of two or more characters (as opposed to a monologue, where only one person talks).

devised theatre: theatre/plays or a performance that often comes out of improvisation, an object or some other stimulus.  In a classroom situation, it usually refers to plays the students have written together as a group.

dress rehearsal: a rehearsal, usually the final one before the performance is shown to the public.

drilling: a classroom technique that is used to practise language.  It’s used for new language or for words/phrases that students have problems with.  The teacher ‘models’ (says) a word, phrase, or a sentence and then the learners repeat it.  There are many types of drills:

Chain drills: where the phrase that is being practised gets passed around the class (I’ll upload a link to the YouTube channel which will make it easier to understand).

Choral drill: where all the students repeat together (this is my personal favourite).

✲ Personal note. Drills have fallen out of favour due to being linked with the Behaviourist view of language-learning theory.  This was basically learning through habit formation, and it wasn’t really communicative. Though, in my experience, drills can be extremely effective if done correctly, both for memorisation and, more importantly, for pronunciation & intonation.

EFL: English as a Foreign Language.

ESL: English as a Second Language

Forum theatre: Individual members of the class are chosen to enact a particular scene. The rest of the students watch, but both actors and observers can stop the action at any time. They can ask for tips or ideas on how the scene could develop.

Improvisation:  (or improv) is a form of theatre in which the dialogue and/or characters are invented in the moment.

Inquiry-based learning; is an approach to learning which emphasises the role of the students. Rather than the teacher presenting the information, the teacher suggests scenarios and the students explore the material and ask questions.  It contrasts with traditional education.

KISS: acronym meaning Keep It Super Simple (it’s probably the one I use the most when I’m doing teacher-training courses)

learning styles/preferences: This is the way that particular learners prefer to learn a language. Some prefer seeing the words/pictures written down (these are visual learners), others prefer hearing the language (auditory learners), some prefer to do something physical whilst experiencing the language (kinaesthetic learners). It’s a good guide to have in mind when lesson-planning.

lexical set: a family of words related to one another by a semantic principle.  For example, socks, trousers, t-shirts are all different types of clothes and form the lexical set of clothes.

to manipulate:  to control something, For example, ‘puppet manipulation’.

Parallel scenes: Two or more scenes are played next to each other. The action of one scene can be ‘frozen’ and the other brought alive to explore the connections between them.

Panto or Pantomime: historically a type of mime originating from Roman times where the actors mime the story to music. Also, it’s often used today in British English to describe a type of musical comedy on stage. It’s for all the family, and generally the performers break the fourth wall by directly addressing the audience. It is often very interactive with the actors encouraging the audience to take part by booing, clapping, and cheering.

to recite: to repeat something aloud, often from memory. For example, ‘Anna recited a poem for the class’

scaffolding: refers to the help (prompts, questions, non-verbal communication) or preparation for an activity provided by the teacher because, without it, learners might not be able to complete the task. Some examples of scaffolding for a speaking activity might be:

a springboard: the basis from which other things develop.

thought tracking: The thoughts of a character are spoken aloud, either by the character himself or by other participants in the performance. It might be used when the action is frozen or the character is stationary.

TPR: Total Physical Response. Is a teaching training methodology developed by James Asher. It basically is the movement or action of something at the same time the student hears the word. For example, when giving young learners instructions how to make an origami figure and the teacher says ‘Fold the paper in half’ and at the same does the action, it’s very clear what the teacher is talking about.

People who are taking their CELTA course might have stumbled on this page while searching for EFL/ESOL definitions. If so, I strongly reccommend this book. For full disclosure, this is an Amazon affiliate link, and if any money is made (and that’s a big if!) it will go towards the running costs and upkeep of the website.  Thanks!